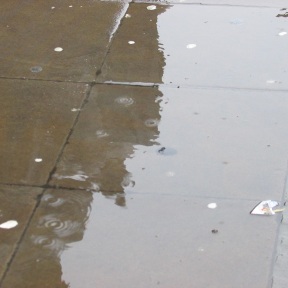 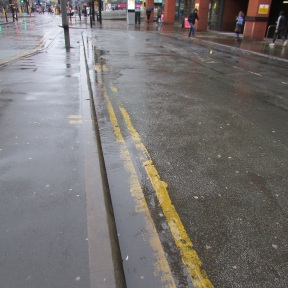 It always rains in Manchester; that’s why
The station signs on Platform Two
Are printed in a wild, distorted script
To compensate for all the crystal veins
Racing down the window of the train.

It never rains in Manchester;
The light reflected from the Ship Canal
Is just an undulating memory to those
Lost souls who find themselves beneath the bridge.

Because the books have crumbled into dust
We’ll never find out how the story ends
And I can only measure out my days with
A piece of string too dry to hold a knot.

It always rains in Manchester
An atmosphere of hydromatic bliss
That shudders like a quantum field, teeming
With cars and houses, trees and people
And the spaces that they need to occupy.

The gulls reflected in the Ship Canal
Are no more real than sketches and the dreams
That will become a vast parade of tower blocks
When tomorrow’s architect evokes
A new horizon made of glass. 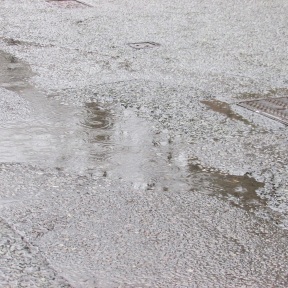 Journal Entry, 23 Feb 2019:
On the train last week I overheard a woman on her mobile phone – or should I say phones, ‘cos she was juggling two discussions. Every few seconds she would pause and say ‘Hang on, I’ll be with you in a minute’. She grabbed an envelope from her bag and began reciting her name and address; but then she stopped and said ‘No, sorry, I meant three, not thirteen.’

After a few seconds she returned to the other conversation and began reading out a series of numbers, which I realised were a credit card account and the associated security code. If I had been quicker, I could have scribbled down these details and then tried to impersonate her in order to steal online goods.
I wonder if anybody has ever tried to make fraudulent purchases using my identity?

Journal Entry, 28 Oct 216:
Exactly 52 weeks ago that Paul and I drove here from Leeds in a rented van full of my stuff.

Yesterday went to Jobcentre to sign on. Lisa was away so I had the lovely Juliet who carefully scrutinised my job search list of activities – even though I have spent this week at the Renaissance Hotel doing my work experience placement.

Last night went to the Writers’ Group, and we all went for a drink in the Catholic Club to celebrate the first anniversary.

At the Jobcentre there was a rep from a local employment agency (Paragon Kerr) who was looking for general warehouse staff. So I filled in the form: name, address, DOB, marital status and bank account details. It seemed as if I was actually signing up to accept an offer of employment.
He asked if I had any proof of ID – I said yeah, I’ve got a photocard driving licence – but you’re the only person in here who’s not on first-name terms with me.

‘Oh?’ he said, ‘Why’s that, then?’ I explained that I had been signing on at that office for nine months.
‘So how come you haven’t found work? Are you actually applying for any jobs?’

I said that I had made numerous applications for all sorts of technical jobs as well as B-and-Q and Tesco. He took photocopies of my driving licence and P45 and said he would be in touch tomorrow or Monday.

Perhaps it was the enormity of the event, or perhaps I was reluctant to discuss an event that was still gradually unfolding and may have taken a more serious turn. Whatever the reason, I recently noticed a gap in my diary for the third weekend in June 2005. This weekend each year was the occasion for the Farmyard Party, a huge bike rally held in the grounds of Duncombe Park near Helmsley in Yorkshire.
The grounds included a valley next to the river, and the music from the main stage would carry through this vast area. It was one of the most popular biking weekends due to the special atmosphere created by this setting. 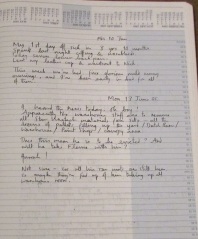 At the time, I was active with the Manchester branch of MAG and part of my duties was to attend the regional meeting in Scarisbrick, which took place every two months following the national reps’ meeting. On this occasion, it turned out that the calendar fell so that the regional meeting would be held on the Sunday of the Farmyard Party.

‘No problem’ said Tony. ‘We’re all going to the Farmyard anyway, so we could have the meeting on site on Sunday lunchtime.’
I was a bit uneasy at this, and mentioned that I might find it difficult to concentrate properly if we were surrounded by revving bikes and people unpacking their tents. And the catering wagons would be closing up, so we would not be able to get refreshments easily.

‘Tell you what’, I said, ‘I’ll miss the Farmyard and come straight to the pub here for the meeting as usual. Your journey home would be almost as long anyway.’
There were a few grumbles at this, but people recognised that holding a regional meeting in a field between people parked up twenty minutes’ walk away from each other might not be quite as easy as he had suggested.
So I stayed at home (true, I was annoyed at missing the Farmyard) and then, on the Sunday morning, rode over to Scarisbrick to wait for the others.

Perhaps I treasure the memories of the Farmyard too dearly to admit that anything distressing could happen there. Or perhaps I was reluctant to write about the event, since other people had been present and witnessed things first-hand, whereas I had not.

I arrived at the pub and settled down with a snack and a drink; eventually Tony and the rest of the crew turned up, looking dusty and sunburnt. ‘Wow, you missed a great weekend’ they said, ‘It’s been absolutely roasting.’ After a few minutes the rest of the regional committee members arrived, and we held the meeting, discussing local campaigns and ongoing events. Since everyone was fairly tired after the long ride from Yorkshire, we finished up quickly and went out to the car park to set off home. As he was pulling on his jacket Tony remarked that he had just received a phone call from one of his friends who was still at Helmsley. ‘He said it’s actually started raining there, but it was bone dry when we left this morning.’

We all said goodbye and rode away. Within twenty minutes the sky had gone black and it was raining hard. Visibility was so bad that I pulled onto the side of the road beneath a motorway bridge for shelter, and was soon joined by four other riders.

Eventually I arrived home and clambered out of my wet clothes. At the time I was living in a flat with no TV, so I put on a CD and started making coffee, then turned on the computer to start typing up my notes from the meeting.
Then I saw the news stories; a flash flood had struck the village of Helmsley, causing widespread damage to property. The rain had also spread to Duncombe Park, sweeping portable toilets and bikes and tents and food wagons into a chaotic heap at the end of the valley. I dread to think what might have happened if the rain had arrived at two o’clock in the morning…

I was a jobless graduate
Hoping to stumble upon the missing equation
My arsenal of prim hexagons and curly arrows
Meant nothing to the robot
Facing me across a polished desk.
I wasn’t married, hadn’t been abroad
On holiday, had never sat behind the wheel.
Running for the train, I wondered
Briefly if all this was just a waste of time.

I became a technician in the lab, where
Glassware, solvents, probes and numbered dials
Allowed me to confuse myself. Deep within
The SEM we saw the details of a canyon
Slumbering within a flake of paint.
I had my motorbike, a PhD, I’d
Travelled overseas eleven times. Who could dream
Of any better life than this?

I find myself employed once more, loading
Packets onto supermarket shelves. Two days
A week I lift canned fruit and
Long-life milk and breakfast flakes that
Seemed to taste of wood. The shelves themselves
Are made of powder-coated steel
But no-one really cares. I sometimes work
The pet-food aisle, where gleaming cats
Pass judgement on me from their neat array of tins.