In 2008 the former car park on Manchester’s Princess Street was hemmed in by huge glossy hoardings, promising the arrival of a modern leisure/retail/residential complex to be called ‘Origin’. A couple of cranes and cabins took their place on the site, ready to begin work. And then the UK economy tanked as a result of the sub-prime mortgage frenzy and reckless lending. 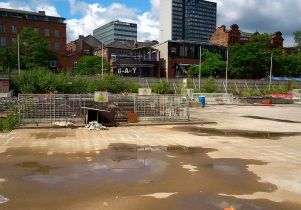 In 2015 I looked again at this forlorn site; it remained a bleak concrete apron from which odd sections of rebar protruded like weeds. 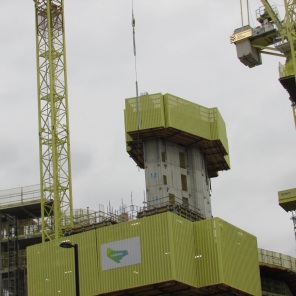 But by 2018, construction was well underway, with yellow steel supports helping to assemble this city in the sky. I wondered if the yellow paint contained lead chromate or (radioactive) bismuth vanadate? Would it matter? Does anybody care?

In the Spring of 1983 I went with John to visit our friend Steve, who was studying Chemistry and Computing at Sheffield Polytechnic. We arrived by train and went for a drink in town, bumping into some of his (many!) friends, walking up very steep hills, and eating pizza outdoors in a freezing gale. 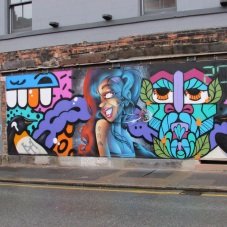 I was intrigued by his fellow students, who all seemed assured and articulate, with long hair and huge record collections which included Joan Baez, Brahms, Leonard Cohen and Kraftwerk. We travelled round town by bus; public transport was absurdly cheap, thanks to council subsidies. I remember having to drop five or six pence into a machine, which would then print out a photocopy of your money; this served as the ticket for the journey. 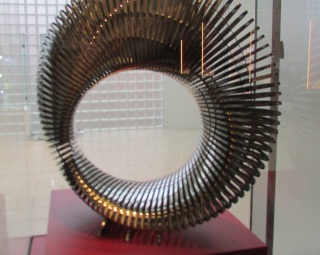 The following night we went to see the Halle Orchestra performing Weber, Mozart and Strauss. Ein Heldenleben is hard work if you have never heard it before; at the time it was just a long, impressive wash of beautiful noise, but now I would recognise the narrative and the catalogue of quotations from his earlier works.

I was reminded of this on a recent visit to Sheffield, when I had a look round the Site Gallery. This institute holds a small, frequently changed exhibition of works. Some art galleries are very consciously arty, and aim to enhance your viewing experience by painting the walls with ‘Neutral Beige Cadenza No. 648’ specially formulated by Clovisse and Broome.

The Site Gallery is quite different; the room is broken into sections using temporary walls made from huge panels of high-grade MDF all bolted together using yellow steel brackets. The brackets (universal design) appear to be the same colour as the construction metalwork that was used to build the tower block on Princess and Origin in Manchester…

And the various display items at Site are not numbered, or labelled, but are instead mounted on the bare MDF. Visitors are provided with a chart showing the layout of the gallery and the names of the objects at each location; you can decide whether to wander at random, enjoying the exhibits with no idea what they are or who the artist might be. Then, after a drink in the café, you can revisit the display using the printed guide to add knowledge and context to your initial impressions of the works on show. 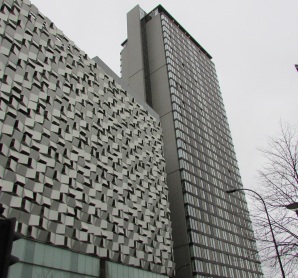 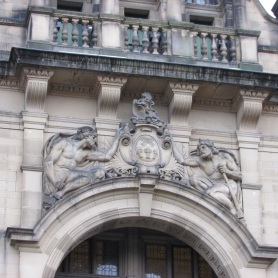 Of course, some of the artworks need no caption – for instance ‘Rare Earth Elements’, a huge mural by Suzanne Treister which looks like a blueprint for the cover of a Captain Beefheart album, or a cosmic chart devised by Roger Bacon.

Seeking shelter from this blizzard of information, we move round the corner to a different exhibit (the corner itself, and all the MDF panels and steel brackets and sheets of corrugated Perspex are part of the exhibition and have been designed to enhance the theme of crystallinity) which comprises a video sequence and an unobtrusive lump of rock which, according to the catalogue, is uranium ore.

In a few steps we have moved from the lanthanides to the actinides, and I am reminded of a TV drama called ‘Threads’, broadcast in 1985, which showed the effect of a nuclear strike on Sheffield. An unconvincing narrative, it gave us a picture of society in ruins, when the real thing might have caused anarchy, mayhem and chaos throughout the British Isles.

To get to the Graves Gallery we make our way up to the main city library and then up four flights of stairs; the square stairwell surrounds another random artwork, a tall cloud of suspended fabric shapes which resemble a cross between books and birds; ideas in flight?

I reach the top floor where a caption painted on the wall tells me about the floating books: Blue Bird, 2007 by Seiko Kinoshita. 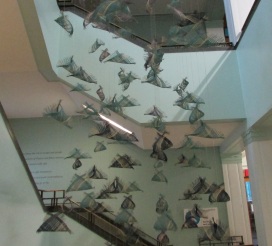 Unwittingly, I go in through the out door (out door, out door) and proceed through the various parts of the gallery, starting at the large display of works by Wilhelmina Barns-Graham. There are semi-abstract paintings and collage works showing geological formations, glaciers, seascapes and great sheets of lava.

A comfortable sofa invites me to sit and make notes (since photography is not allowed in here) and I browse through a glossy book of her paintings. The colour register of the illustrations is not quite faithful to the actual paintings. Does this matter?

Moving on to another room I find a collection of black-and-white photographs by Linda Benedict-Jones, stylised landscape images from Yorkshire and Derbyshire. Then we move through other rooms filled with industrial landscapes and war paintings and abstract pictures (Kenneth Martin, Keith Vaughan) and an immense tapestry by Grayson Perry, called Comfort Blanket – a visual compendium of everything that makes Great Britain Great Britain. 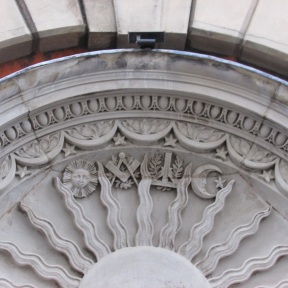 And then, at the end of my journey, I find myself at the start of the story: David Jagger’s painting of Doctor Graves. He is presented as a photograph in a plain black suit, with nothing except his cufflinks to denote any personal or financial status. This picture is set alongside Jagger’s Portrait of a Lady, perched elegantly before a luminous maze of abstract swirls. Completely different in every way, these two pictures are like scenes from a documentary about a forgotten world.